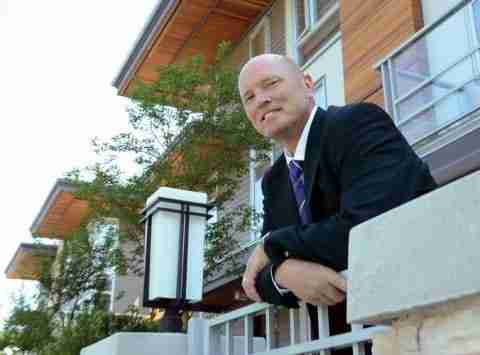 When homeowners in the new Seven35 condos in North Vancouver or the Sail building at the University of BC take a shower or turn on their dishwashers, they can take some satisfaction in knowing the heat they use isn’t being wasted down the drain.

About 70% of the energy used to heat the buildings’ water is recovered and reused. Even heat from the water used to flush toilets is reclaimed using a wastewater heat recovery system – called the SHARC – built by Richmond’s International Wastewater Systems (IWS).

“Their hot water heating bill on [Seven35] using the SHARC system for 60 suites is $240 a month,” said IWS president Lynn Mueller. “For every dollar you spend to operate, you get $5 to $6 worth of heat back. All of the energy stays in the building.”

The SHARC system is one of the sustainability features that allowed Adera’s Seven35 building to meet LEED platinum standards and the Sail building to be certified platinum under UBC’s own green building code – the Residential Environmental Assessment Program (REAP), which requires new buildings to have lower water, energy and resource consumption.

In the Seven35 building, the SHARC system provides 75% of the building’s hot water, said Eric Andreasen, vice-president of marketing and sales for Adera. Natural gas is used for 25%.

Chris Baber – energy manager for the City of Vancouver’s False Creek Neighbourhood Energy Utility – said 55% of the greenhouse gases in a city like Vancouver come from heating buildings and their water – most of it wasted.

“The U.S. Department of Energy did a study and they estimate there’s 400 billion kilowatt-hours of energy that goes down the drain that could be recovered,” said Mueller, adding that is 17 times the power output of the Grand Coulee dam in the U.S.

The SHARC system for the 170-unit Sail building cost $300,000. Although there are higher upfront costs for such a system, it pays for itself in about five years in lower energy bills, Mueller said.

“They might pay a little bit more on the leading edge, but they’re getting an immediate break when it comes to operating costs,” Andreasen said.

But that’s not the only selling point. Environment-friendly homeowners are prepared to pay a premium for homes that are built according to strict sustainability standards, Andreasen said. And ultimately, that gives a home greater resale value.

“If it’s got all this third-party verified sustainable features baked in it, you’re going to get a better price for that home,” Andreasen said.

Vancouver became the first city in North America to build a municipal-scale energy system that reuses heat from sewer water – the False Creek Neighbourhood Energy Utility. It provides heat for more than a dozen buildings, including Olympic Village.

Even in January, sewage water remains at a consistent temperature of about 20 degrees Celsius, Baber said.

This article is also available online at the Business Vancouver website via this link: