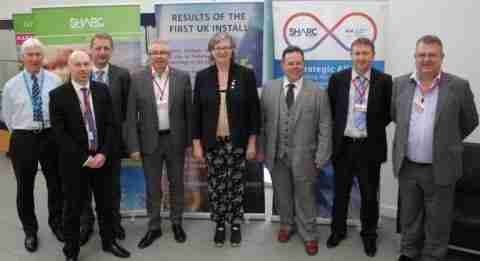 Borders College was delighted to welcome South Scotland Labour MSP Claudia Beamish to its Scottish Borders Campus in Galashiels recently when she paid a visit to the College’s award-winning heat from waste water project site.

Having spent a time as an Eco-Schools Coordinator prior to becoming an elected Member of the Scottish Parliament, Ms Beamish’s case load as Shadow Cabinet Secretary includes Environment, Land Reform and Climate Change.  Vocal about issues relating to fuel poverty in Scotland, she last year chaired a conference for Scottish Policy Conferences focusing on the subject of renewables.

Ms Beamish has been finding out first-hand about the various renewable energy solutions already progressing across her constituency with insightful visits to Sun Amp (an East Lothian renewable energy company) and BHC Ltd (structural steelwork manufacturers in Lanarkshire who heat their whole site using biomass boilers).  After meeting Paul Kerr (Head of Scottish Water Horizons) at the Scottish Green Energy Awards in November, she was eager to find out more about the collaboration between Borders College, Scottish Water Horizons and SHARC Energy Systems.

The first of its kind in the UK, the project (funded by Equitix and the UK Green Investment Bank plc) was launched in December 2015 and has already enjoyed significant success, scooping two national industry awards towards the end of last year – Best Newcomer at the Green Gown Awards 2017, and Best Innovation Award at the Scottish Green Energy Awards 2017.  The system operates by extracting residual heat from waste water in the sewage system, converting it into reusable energy which is capable of providing 95% of the heat needed for the campus.

Vice Principal – Finance and Corporate Services Pete Smith, and Facilities Manager Robert Hewitt were on hand to show Ms Beamish around the energy centre and answer questions, having both seen the project through from conception to completion.  Pete said:

“Borders College is delighted that Claudia was able to spend time to find out about this innovative system.  Not only does it provide a low-carbon heat source for the Campus, it is a low-cost alternative to traditional heat sources and provides a level of price certainty throughout the 20 year period of our heat supply agreement.”

Russ Burton, Chief Operating Officer of SHARC Energy Systems, added: “We are delighted our work with Borders College has come to the attention of Ms Beamish.

“It is an honour to be able to demonstrate how strong relationships, shared vision and great working partnerships can come together to make a significant impact for all of the parties involved.

“We are looking forward to helping the college achieve their next level in carbon reduction activity over the next two years.”

“Scottish Water Horizons are always looking for ways to support renewable energy initiatives and Scottish Government targets.  The installation at Borders College is an excellent example of how we can further Scotland’s low-carbon economy by maximising the potential found in Scottish Water assets.

“We were thrilled to be present for Ms Beamish’s visit and share with her the benefits that the scheme has brought to the college, as well as the opportunities to roll out further systems throughout Scotland.”

Ms Beamish herself found her visit extremely informative, describing the project as ‘extraordinary’:

“It’s exciting to see, as with all new green energy technologies moving towards commercialisation, there is a very strong value in seeing demonstration projects that are excellent models in renewable heat.

“Renewable heat technology is commonplace in much of Europe – in Scotland, I want to see confidence increase in how we bring heat and light to our buildings.  There are opportunities in the future to share this kind of development to tackle fuel poverty, as well as lower carbon emissions.”

The SHARC project at Scottish Borders Campus is still under development with further efficiencies being continually sought.  And, with the Scottish Government’s upcoming Energy Strategy (which Ms Beamish will be involved in scrutinising the implementation of, along with the finalised Climate Change Plan) seeking to ensure a progressive mix of energy solutions for a low carbon, sustainable Scotland, Borders College can proudly stand as an early adopter for its region.