Making the most of wastewater

Making the most of wastewater 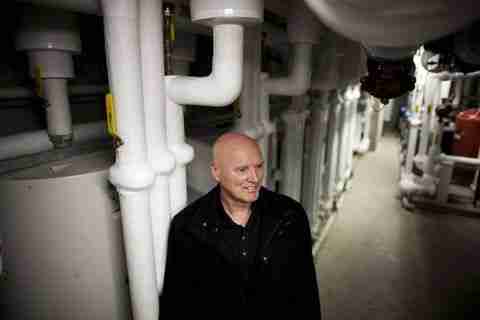 Lynn Mueller was working with geothermal heating when he realized wastewater could be used for heating.

The warm water being flushed down Canada’s sewers could become a huge source of recycled energy.

Wastewater heat is already being put to use in a handful of buildings in British Columbia, where a small company called International Wastewater Systems is on the leading edge of the technology and hoping to turn it into a formidable business.

IWS’s system takes heat from the water going down the drain from sinks and toilets in a condo, and transfers it to the clean water coming into the building. It can dramatically cut water heating costs, and thus pay back the price of installation within a couple of years.

The system works because wastewater is consistently at about 20 to 25 degrees Celsius. With heat exchangers, that energy can be used to generate hot water at higher temperatures.

IWS founder and president Lynn Mueller, who trained as a refrigeration mechanic, said he was working with geothermal heating systems when he began considering all the warm water which was being flushed down the drain.

“I was thinking that every day I comfortably flush down water that it cost me $10 or $20 a day [to heat],” he said. “That is perfectly good heat.”

A 2005 U.S. Department of Energy study estimated that 350 billion kilowatt-hours of heat energy is flushed down the drains in the United States each year.

The key to Mr. Mueller’s system is the special filter his company designed, which temporarily removes the solids from the wastewater, leaving it just clean enough to pass through a heat pump without clogging the heat exchangers. The warmth from the wastewater is transferred to a flow of fresh water – without either stream of water coming in contact with each other. The solids are then combined back into the wastewater before it goes down the sewer.

The system also has software that monitors it at all times – “a brain that reports to us before any problem exists,” Mr. Mueller said.

One of his first customers was Adera Development Corp., a condo and townhouse builder in Vancouver. It was looking for ways to work renewable energy technology into a new 60-unit development in North Vancouver called Seven35. The sewage heat recovery system that was installed two years ago resulted in a 75-per-cent reduction in energy use for water heating, and helped the project get a LEED platinum rating.

Eric Andreasen, Adera’s vice-president of market and sales, said his company is trying to include as many environmentally sustainable features as possible in its condominium developments. When the company heard about the IWS wastewater recovery system from its mechanical contractor, it jumped at the chance. But it wasn’t just the green credentials that made it attractive. “Obviously financial savings was one of the big things,” Mr. Andreasen said.

A similar system was installed in Adera’s Sail condominium project near the University of British Columbia – a bigger 172-unit development where the wastewater warmth contributes to building heat as well as hot water.

Mr. Andreasen says residents aren’t worried about contamination from the sewage getting into the incoming hot water, once it is explained to them that it is a completely closed system where only the heat is transferred. “There is no possible way that any contamination can happen,” he said.

IWS has also installed its system at a community theatre complex in the Vancouver suburb of Richmond. In that project, the heat is drawn from the municipal sewer system, rather than the wastewater coming out of the building.

IWS has five more projects under way in Vancouver, Mr. Mueller said, and another 40 or so in various stages of development around the world. Among those: a wastewater heat recovery system for a 250-year-old hospital in Britain.

Currently the payback for the system – through decreased costs for heating water – is about two or three years for a residential building with 200 or more units. But it can be faster, in some circumstances. At a private hospital in Boston that has high-cost electric water heaters, the installation of an IWS system will save enough money to pay the full cost in less than six months, Mr. Mueller said. The price of that system is about $800,000, but “it will save them $2-million a year,” he said.

Mr. Mueller acknowledges that people are initially leery about using the heat from sewage to warm up clean water coming into a building. “The first question always is, ‘Can I smell the system working in my building?'” he said. “But ours is completely sealed. There is no smell whatsoever.”

The fact that the technology can be used in densely-packed cities, where geothermal power is impractical and there is little space for solar panels or wind turbines, is also a great advantage, he said.

This article is also available online at the The Globe and Mail website via this link: